Based on 49 reviews Write a review

结香
Back to Previous Page 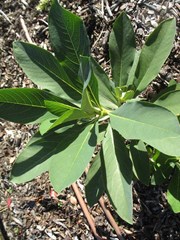 Winter hardy to USDA Zones 7-10 where it is best grown in humus-rich, moist but well-drained soils in part shade. Needs protection from hot afternoon sun. Intolerant of hot dry summers.

Edgeworthia chrysantha, commonly called paperbush or edgeworthia, is a deciduous suckering shrub that typically grows to 4-6’ tall and as wide. It is native to woodland areas in the Himalayas and China. Short-stalked, lanceolate-oblong, dark green leaves (to 3-5” long and 2” wide) are crowded near the branch ends. Alternate, narrow-oval, dull dark green leaves (to 5” long and 2” wide) are gray-green beneath. No fall color. Young leaves are covered with silky white hairs. Tiny, apetalous, tubular, yellow flowers are compacted into dense, rounded, umbelliferous flower heads (up to 40 flowers per head). Flower buds begin to form in late summer each year, overwinter on the bare stems and burst into bloom from late February to early April before the new leaves emerge. Silvery winter flower buds and brown branching are ornamentally attractive. Fruits are dry drupes.

Inner bark can be used to make quality paper as indicated by the common name of paperbush. Plants are widely cultivated in Japan for use in making the paper used in the production of Japanese banknotes.

Some confusion currently exists in regard to the nomenclature for this plant. Some experts believe that Edgeworthia chrysantha (specific epithet refers to golden flowers) and Edgeworthia papyrifera (specific epithet refers to paper producing bark) are synonyms. Both were submitted for publication about the same time in the mid 1800s, but the former was slightly prior in time to the latter. Assuming these plants are synonyms, the preferred name should be Edgeworthia chrysantha based upon the general rule that first-in-time prevails. On the other hand, some confusion still exists because The Plant List currently lists both of these species as synonyms of Edgeworthia tomentosa.

Genus name honors Michael Pakenham Edgeworth (1812-1881), Irish-born botanist, and his half sister Maria Edgeworth.  Michael spent much of his life working in India where he was employed by the Indian Civil Service from 1831 to 1881.

No serious insect or disease problems.